From our perspective, it looks like Amazon is winning the cloud race. Amazon and Google pioneered the notion of ‘devops’, where agile practices are applied to merging the disciplines of development and operations. Devops teams are inherent to cloud computing. They are the only way to scale and compete.

For example, in my conversations with Amazon it’s been explained how their operations team is really only two parts:

There isn’t a team that manually configures software or hardware as in traditional operations teams or enterprise IT. This is by design. It’s the only way to effectively scale up to running thousands of servers per operator.

More importantly, by automating everything, you  become fast and agile, able to build an ecosystem of cloud services more rapidly than your competitors.

With the possible exception of Rackspace Cloud, I’m not sure that anyone else is  in Amazon or Google’s league. Amazon in particular, has a track record that is incredibly impressive.

From a  quick culling of all of the Amazon Web Services press releases since the launch of it’s initial service (SQS in 2004), after removing non-feature press releases and minor releases of little value, we  came up with the following graph: 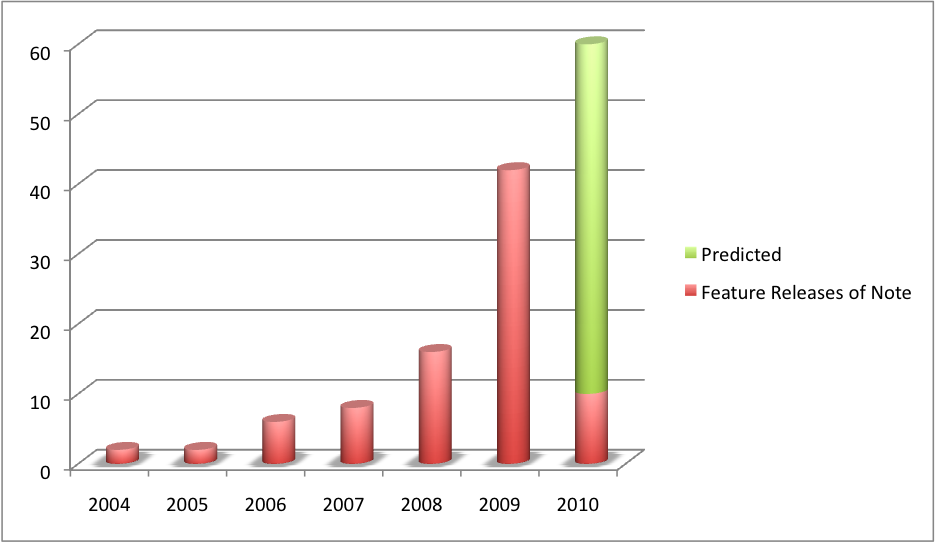 In contrast, traditional hosting companies moving into cloud computing are hobbled by running two teams: development and operations.  Expect the gap to widen as more hosting companies continue to misunderstand that this race isn’t about technology; it’s about people, software, and discipline.

So what’s the takeaway?  Simply put, in order to be a major cloud player you need to change how you do IT and build clouds.  Either hire someone who can bring the devops practice into your shop or engage an cloud computing engineering services firm like Cloudscaling  to help you build fast, nimble teams that focus on automation and rapid release cycles.